Home Uncategorized This is Progress

Well, we’re back on track – an eight-man construction crew hacking apart, tearing up, making a mess that will eventually turn into a new meditation centre. Today the steps to the downstairs cave were rebuilt, most of the old meditation area floor was removed and the foundation extended, and the second bathroom got its floor tiled. And they topped it off by collecting a whole slew of rocks from the neighbour’s field.

Still no sign of the engineers; if they don’t show, we’ll just go ahead and build the new kutis without them – with a team like this, I’m confident we’ll have them done by the end of next month; if they can just stick around long enough to complete them!

Here’s some pics, for those who like such things: 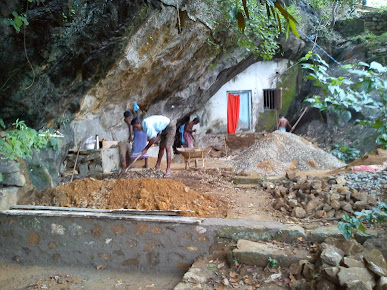